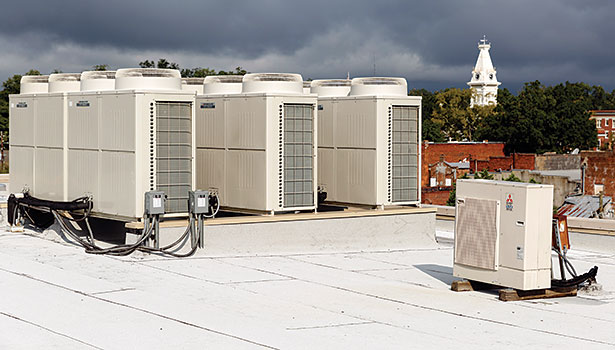 Mitsubishi Electric’s variable refrigerant flow (VRF) products are pictured above on the rooftop at a Century Bank of Georgia location after a recent installation. (Photo courtesy of Mitsubishi Electric US Cooling & Heating Division)

With rising energy costs and expanding energy consumption awareness, it’s no wonder variable refrigerant flow (VRF) technology continues to gain ground in the U.S. marketplace. VRF has the potential to achieve 34 percent energy savings compared to older systems, according to a study by the U.S. General Services Administration.

The U.S. market was estimated to be worth $7.25 billion in 2012 and is expected to grow at a comound annual growth rate of 5.2 percent through 2019, according to a report by Transparency Market Research.

Malcolm Persaud, senior manager, product and market development, Panasonic Air Conditioning Group, said because the U.S. has a history of preferring ducted systems, most contractors’ skill levels revolve around sheet metal and ductwork installations. However, the market is now experiencing a paradigm shift.

“Consider 30-plus years ago, when Japanese car manufacturers came to the U.S., the Americans said, these things will never sell,” he said. “Now, 30-plus years later, what are we seeing on the roads — Japanese cars. I believe we are at the cusp of that change right now, and it’s happening very rapidly. In the last three years, there are probably seven new VRF manufacturers from Asia that have moved into the U.S. market. We have to change the perception, like the car manufacturers did, in the HVAC industry.”

Kevin Miskewicz, senior manager, commercial marketing, Mitsubishi Electric US Cooling & Heating Division, believes the VRF market is going to ramp up and grow more quickly as new efficiency regulations take effect. “We introduced the technology into the market in 2003. In 11 years, it’s grown quite rapidly to just over a half billion dollars.

“In the past couple of years, major industry regulatory organizations, such as the DOE [Department of Energy], ASHRAE, and AHRI [Air-Conditioning, Heating, and Refrigeration Institute] have started to officially recognize the fact that VRF zoning systems have unique efficiencies. They’ve put in place revised policies and regulations to recognize that fact and push it forward,” Miskewicz explained. “As VRF zoning systems become more mainstream, adopted, and recognized, we’re going to start to see an impact on VRF sales in the market.”

AHRI’s specific VRF system certification has helped distinguish the market. “It [AHRI’s certification] allows people like engineers, architects, and contractors to feel confident that the products have a third-party certification, which, in most cases, is almost a de facto requirement for putting them in.”

Another contributing factor to U.S. market growth may be simply based on location. “Historically, VRV® [variable refrigerant volume] products have been manufactured primarily by Asian-based companies as manufacturers based their operations in countries where VRV products were installed,” said Takayuki Inoue, senior vice president, VRV/light commercial, Daikin North America LLC. “Today, Daikin is assembling VRV units in its manufacturing facility in Houston. This domestic opportunity will help the VRV market to evolve faster. With more products in stock, faster delivery times, and readily available parts, Daikin is fully supporting the VRV marketplace in North America.”

Persaud considers himself an evangelist because he was one of the originals who launched VRF products in the U.S. After spending much of his time touting the technology’s benefits to architects, engineers, and building owners, Persaud said the greatest change in the market has been acceptance.

“If you were looking for drivers in the VRF market, one of the most important aspects would be the increase in the utility pricing,” he said. “If you look at the major areas in the U.S. where the utility prices are above normal, generally in the Northeast, in areas such as California, New Mexico, and Arizona — places where they have prolonged heating and cooling requirements — those areas are always looking to reduce operating costs. The good thing about VRF is it lends itself to reducing operating costs. When you do a load calculation for a building, it’s actually calculated on the coldest day of the year and the warmest day of the year. The rest of the year, however, is actually less than that. A system like VRF matches loads, so as the loads modulate, with the temperature outside moving up or down, the system output also modulates to actually match that load, which means you’re using energy proportional to your need. A typical air conditioning system does not do that; it’s either on or it’s off. That single driver, if you like, is why there’s such a great acceptance of the technology.”

Another reason for the growing acceptance of VRF is the versatility of the technology, according to Nick Shin, portfolio manager, Trane. “VRF solves an HVAC application, especially for the Northeast market in homes, offices, and government buildings that are 60 to 80 years old and don’t have ductwork. It’s hard to cool and heat multiple rooms in a big building like an office. … VRF is the solution to this problem, which was unsolvable until now.”

“VRF is a sophisticated technology that provides many benefits. Educating engineers, architects, contractors, and building owners about these benefits will be very important to the equipment’s growth,” Moltner said. “Contractor training and technical support will be critical to ensure this growth is sustainable by ensuring that equipment selection, systems design, installation, and service are achieved properly, and the end result will be that VRF gains a reputation as a reliable, efficient, and effective heating and cooling system.”

Lennox is one of several manufacturers that has made training a requirement prior to selling its equipment. The manufacturer has opened three training academies for technicians in Carrollton, Texas; Fort Lauderdale, Florida; and Pine Brook, New Jersey, and plans to open a fourth in Eastvale, California, soon.

“It starts with educating contractors and engineers on the benefits of VRF technology and then allowing those contractors and engineers to target applications where those benefits make sense and the application is best suited to realize the benefits,” Moltner said. “The training academies have both classroom facilities as well as equipment that allows contractors to come in and train on that equipment. We believe it’s very, very important that contractors understand the technology and particularly understand the unique benefits associated with Lennox VRF. Making training a requirement prior to any sale ensures that when contractors install that equipment in the marketplace, it’s installed correctly, and we have efficient and effective operating systems.”

It’s easy for customers to become slightly sticker shocked when seeing the total cost for a VRF system, but manufacturers are encouraging contractors to show contractors the whole picture.

“End users rely heavily on contractors for education and advice pertaining to HVAC,” continued Willis. “Therefore, contractors must, themselves, be educated and comfortable with presenting VRF to building owners. They must be able to effectively sell the benefits of VRF. This means a focus on life cycle cost over first cost. A contractor must also know how to accurately estimate his labor and material costs. VRF can often be installed very quickly, due to the modularity of the systems and a minimum amount of ductwork.”

Miskewicz agreed, saying it is the overall life cycle cost — the efficiencies over time — that make VRF affordable. “There’s a perception that VRF is too expensive. I want to encourage contractors, as well as the folks they’re educating, to really look at the total installed cost of these systems. Cost always plays a factor in any purchasing decision that we make, but it’s commonplace to look at that first initial price and think, ‘No, I can’t put that into my budget,’ or, ‘It’s not going to give me the return I need.’

“People really need to look at that total life cycle cost, which includes things like installation. If you’re putting these into a house, there’s no ductwork to run, it’s unobtrusive construction, and you don’t need additional supports for outdoor/indoor units,” he added. “In a commercial building, it’s things like not making any changes from an electrical or structural stand point. In a historical building, it’s not adding in ductwork or any additional features that may cause that historic building to fall out of its aesthetically pleasing graces. So, it’s about looking at that total installed cost and that total life cycle cost before jumping to a conclusion as to whether this is the right technology for you or your customer.”

Reposted by Cold Craft, Inc. The Experts in the Science of Temperature.  Full Service Heating, Ventilation, Air Conditioning and Refrigeration in Silicon Valley Area of CA.  Our tempologists are experienced in commercial and residential replacement, maintenance, service and installation of HVACR equipment.  Serving the bay area since 1991.  408.374.7292 Lic# 631837