Copper Thieves Beware, There Is Justice When Stealing HVAC

Copper Thieves Beware, There Is Justice When Stealing HVAC

Perhaps you heard of the rampant theft of copper, or maybe you are a victim.  These went rarely unpunished until now.  The catch, isn’t in copper wire, it’s in refrigerant. The EPA regards the intentional venting of the refrigerant R22 an offence that can carry a prison sentence.  So thieves and do it yourself or handymen beware, people are looking out for the environment and it got this guy hard time. 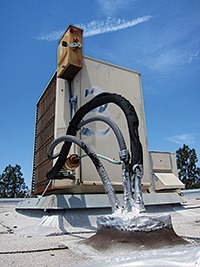 A 35-year-old Columbus, Ohio, man recently pleaded guilty in federal court to violating the Clean Air Act after law enforcement officers witnessed him cutting a refrigerant line on an air conditioning unit and illegally venting hydrochlorofluorocarbon (HCFC)-22, also known as R-22, into the atmosphere. Martin C. Eldridge III now faces 31 months in federal prison for releasing the refrigerant, which is currently being phased out of production in the U.S. due to its threat to the earth’s ozone layer.

While Eldridge’s conviction seems to be an isolated incident, many are hoping it is a sign the U.S. Environmental Protection Agency (EPA) will be cracking down on individual violations across the country.

According to the office of the U.S. Attorney for the Southern District of Ohio, Eldridge and others stole at least 49 air conditioning units between August and October 2013 in order to sell the copper and parts for cash. Randall K. Ashe, special agent in charge of the EPA’s Criminal Enforcement Program in Ohio, said Eldridge’s “continual theft of air conditioner parts was illegal and a clear violation of the Clean Air Act.”

Commander Robert Meader, who oversees the property crimes bureau of the Columbus Division of Police, said his officers actually watched Eldridge cut the refrigerant lines. As soon as Meader was notified of the crime, he recognized it as a violation of the Clean Air Act and contacted federal authorities.

“We had covert undercover personnel following him, and, since he’d hit that particular apartment complex before, they waited for him to cut it,” he said. “Once the hydrochlorofluorocarbon were released, Eldridge violated both state and federal codes.”

Eldridge is serving his federal sentence concurrently with the sentence he received for stealing the air conditioning units. He will require court supervision for a year after his release, and was sentenced to 200 hours of community service.

First Time for Everything

For Meader, this is the first time he has seen an individual convicted of violating the federal law.

“Eldridge now has the notoriety of being the first person charged and convicted in the state of Ohio under the Clean Air Act for stealing air conditioners,” he said. “It’s very difficult to get a charge under that.”

While Eldridge was sentenced to prison time, Meader pointed out he wasn’t the only person to be punished under the law.

“At the time [of his arrest], we had 19 area scrapyards, and seven of the 19 didn’t comply with the federal law, so they had to enter into consent decrees with the EPA,” Meader explained. “If you bring an air conditioner into a scrapyard, as the seller, you have to sign a document saying you disposed of the [R-22] in compliance with federal law; not one of our area scrapyards did that. They also have to have equipment that extracts that fluid, and none of our scrapyards did.”

Meader pointed out that for just one violation, the fine is $39,500.

“They all piped up and said, ‘you have my attention,’” he said. But, even with prison time and hefty fines on the line, Meader wasn’t sure if Eldridge’s fate would necessarily keep others from illegally venting R-22, though he said Eldridge is certainly “going to think twice about doing it again.”

While it is not unheard of for the EPA to enforce the Clean Air Act, Charlie McCrudden, senior vice president of government relations for ACCA, said violations are usually voluntarily reported to the EPA when a leak is discovered — not reported by the police after a suspect has been arrested.

“There’s a lackluster enforcement of Section 608 of the Clean Air Act,” McCrudden said. “In commercial equipment, with a 50-pound charge or above, if there’s a leak in it, you have to report it to the EPA. All emissions are voluntarily reported, and the EPA takes enforcement action, so they’re not going out and finding violations. But, for residential equipment, there isn’t any police force to make sure they’re abiding by the rules.”

McCrudden said the EPA was able to go after Eldridge for the Clean Air Act violation because local law enforcement officers witnessed Eldridge cutting the line and releasing R-22. However, in most cases where an individual is suspected of illegally venting R-22, the evidence is only circumstantial, which makes conviction difficult.

Meanwhile, it’s the law-abiding and responsible HVACR contractors who are suffering from the lack of enforcement, McCrudden said.

“A lot of contractors, or people who purport to be contractors, are deliberately ignoring these rules; they don’t get trained or certified, and they don’t buy the required recovery equipment,” he said. “That puts the playing field in their favor while the upstanding contractor goes through all the regulatory hoops just to be undercut by these people.”

While McCrudden admitted it is really hard to convict someone for violating the 608 rules, he still hoped Eldridge’s conviction would be “a sign of things to come” for the industry.