BEHIND THE SCENES: Richard Hohn does brazing on an Enertech Global geothermal product.

The geothermal industry had a rough year in 2017, mostly due to an unfair marketplace set up by the government. While solar and wind continued to enjoy the renewable tax credits, geothermal was left out in the cold. As a result, geothermal sales were down a significant 45 percent from 2016 to 2017. 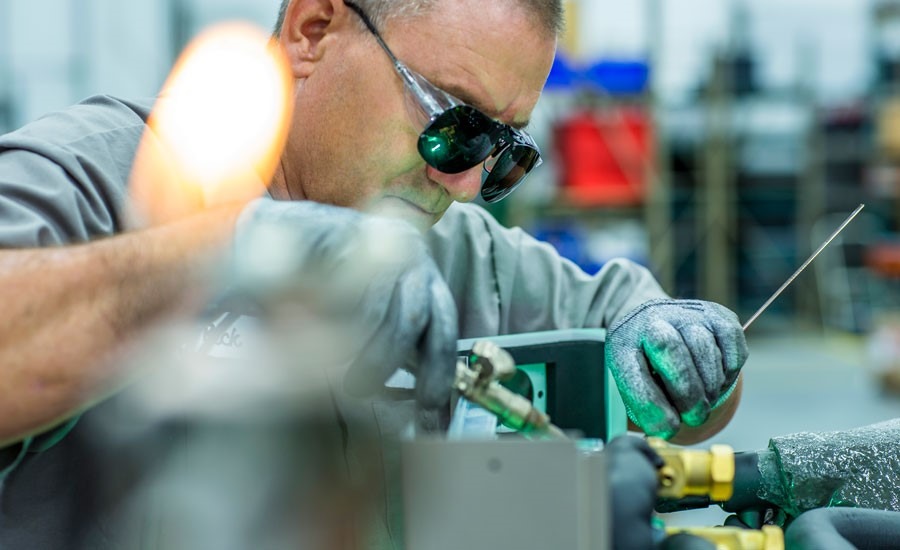 Geothermal manufacturers have renewed optimism for 2018 and beyond due to the reinstatement of their own tax credits, which are retroactive to 2017. There will be a 30 percent income tax credit for residential installation of a geothermal heat pump in 2018 and 2019. It then drops to 26 percent in 2020 and 22 percent in 2021. It ends Dec. 31, 2021.

On the commercial side, it is also retroactive to 2017 for the 10 percent investment tax credit, which remains constant throughout the four-year period.

“The newly reinstated tax credit will positively impact geothermal by aligning it as a viable energy source in the industry,” said Kyle Murray, director of marketing, Bosch. “It will drive sales in the market and encourage people to adopt geothermal systems. Tax credits will also support the development of future technologies that help reduce the cost of ownership, allowing more consumers to own geothermal heat pumps. The increase of geothermal heating installations and systems will help create jobs and future industries that will be sustainable without the tax credit.” 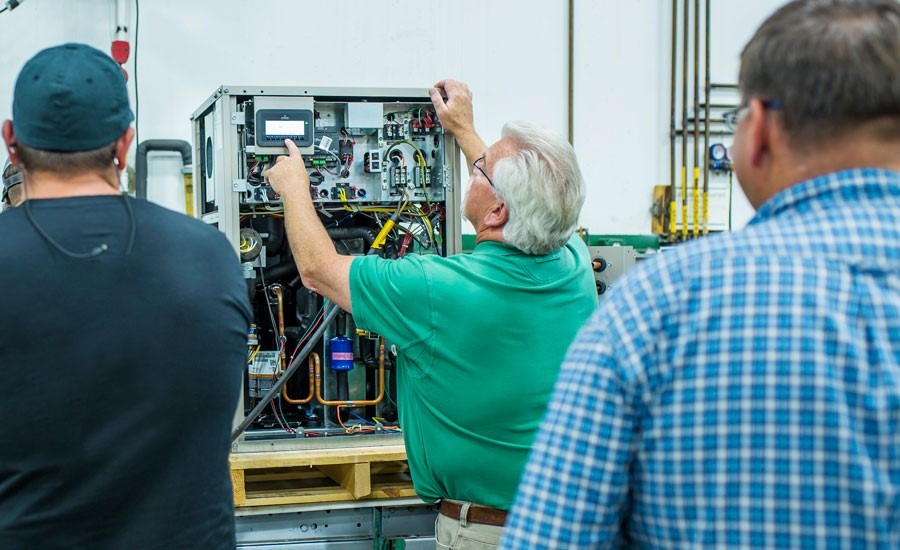 Although incentives are an added benefit to any installation, commercial project justifications are typically designed for a longer period of time and are less impacted by tax credits.

“I see residential as regrowth over the next couple of years and commercial as having stronger growth potential,” Joe Parson, president of Earthlinked Technologies, said. “Just look around, and you will find almost all of the geothermal manufacturers are putting a major effort into growing the commercial side of their businesses. Residential growth will be evident more quickly due to the simplicity of the purchase decision and the ability of installation contractors to more rapidly reenter the residential market. And for our company whose business is primarily residential, we are obviously looking forward to the immediate surge that will come on the residential side.”

However, people in the industry are quick to point out that the tax credits are not a silver bullet. While being on an equal playing field with the other technologies is important, contractors cannot simply begin selling on the tax credit alone.

Leaders in the industry believe geothermal systems should always be sold on their merits — cost savings, energy efficiency, comfort, and safety  — not just the credit.

“The tax credit returning, in addition to the phasedown plan, allows for the geothermal industry to become more mainstream and increase market share while planning for the time when the tax credit is no longer available,” said Smith. “As an industry, we need to do a better job making home and building owners aware of geothermal heating, cooling, and hot water systems as a viable option that meets their needs, and the tax credit assists with that.”

In addition to the tax credits, the geothermal industry received another shot in the arm when Google entered the market. The company formed an independent business called Dandelion to break into the geothermal space. Dandelion is looking to shake up the industry by solving the biggest barrier to the technology — upfront costs. In addition, it will have a no-cost down financing plan for homeowners.

The biggest benefit of Google jumping into the market might just be the publicity and marketing dollars that the company will inevitably bring to the geothermal market. At this point, geothermal makes up less than 2 percent of the HVAC market.

“Google is well known for going after worthwhile trends in the market,” Murray said. “With a large brand name, like Google, entering the geothermal industry, it brings awareness of the technology to consumers and adds credibility to the industry. More and more people, especially millennials, will become engaged and involved in decisions impacting our future, including the geothermal industry.”

Scott Stayton, director of marketing and product management for Climate Control Group Inc., also believes Google can be a benefit to the industry.

“Google is obviously well-recognized, and Dandelion’s prior association allowed them to bring increased awareness to our industry, which is positive,” he said. “Dandelion’s specific focus to reduce the installation cost of the loop would clearly make geothermal systems more attractive and benefit the entire industry. The excitement and promotion helps create awareness, but we must make sure tangible products are available without inflating perceived installation costs that might deter viable customers for our industry.”

Variable-speed, inverter-driven technology has taken hold in the HVAC industry and even more so recently in geothermal. It makes systems run more efficiently because it eliminates abrupt starting and stopping. This technology significantly increases the unit cost but decreases labor and the need for accessories, including pumps and controls for water-to-water applications.

Enertech created a variable-speed, water-to-water geothermal system to satisfy that need. The company worked directly with a council of dealers and distributors to create the unit. It has modulating capacity and delivers radiant in-floor heating and cooling, forced-air heating and cooling, and 100 percent of the domestic hot water needed. The unit is paired with a water heater, so it takes up 32 square feet of space for a full heating, cooling, and hot water set up.

In addition to variable-speed technology, geothermal is also seeing a big increase in both the IoT and home connectivity.

“Everyone is jumping on the bandwagon to develop connected appliances,” said Murray. “Bosch is investing in the world of connectivity and mobility, including forming a division focused on developing products and applications for the connected world of the future. Connectivity is an important trend because it allows installers to read data and understand issues with the system before they even evaluate the system in person — saving them time and money. It also gives the consumer peace of mind, knowing they can check on the status of their system whenever, wherever.”

Cold Craft, Inc. works on geothermal installations in the SF Bay Area. They are also a proud member of California Geothermal Heat Pump Association. If you are interested in learning more and especially how geothermal matches up to traditional heating and cooling check out Cold Craft’s website. Or contact us at [email protected] or 408.374.7292