Solution to the Propane Shortage – Geothermal Heating and Cooling

Winter 2013-2014 has left homeowners cold and fed up.  It isn’t so much a power outage that they are complaining about it is a lack of propane for heating that is causing them pain.  The lack of supply in time of such high demand is sure to drive up pricing.  So don’t be a slave to propane, get a product that is renewable and plentiful!

If you have propane heating it is very expensive.  Do yourself a favor and contact Cold Craft, Inc. for more information about geothermal heating and air conditioning.

The following is more information aboout geothermal heating and air.

“This case study is an example of what can be done in your home – using creative heating and air conditioning.  Greener feels better because it is better for the environment.” Susan Nichol Cold Craft, Inc. 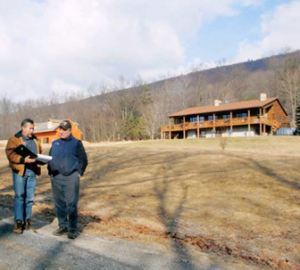 Yates and Travis Wenger discuss plans for the Creek home.

Outdoor enthusiasts will go to great extremes to set up camp.  An example of just how far they’ll go is the “re-greening” of a rural log home near 28-mile-long Raystown Lake in central Pennsylvania.

In the fall of ’07, Travis and Rachel Wenger spent months looking for a family retreat and hunting lodge. During a second visit to one of the properties – a 2,400 sf., three bedroom log home built in ’94 – they were on the home’s wrap-around deck when suddenly the realtor clammed-up and turned pale.  A 400-pound black bear, ignoring them, climbed the opposite stair to assault the gas grill.

Convinced that it was “the sign we were looking for, we immediately agreed to buy the place,” said Travis Wenger.

The home is nestled into a mountainside with property that borders thousands of acres of state game lands where deer, turkey and bear roam freely.  Nearby, the great outdoors – several state parks, the Juniata River and miles of wildlife trails – beckoned. 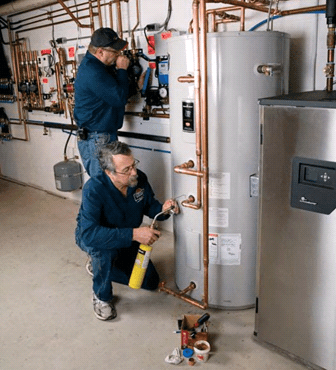 Travis Wenger and his father Merv run a cabinetry business, and this wasn’t their first remodel project. Their experience includes several home renovations, so they quickly set out to remodel the log house, adding more bedrooms and “truckloads of insulation.”  Plans called for extensive HVAC upgrades with geothermal-to-radiant heat and a large log garage with living quarters above for guests, all radiantly heated.

Contractor columnist and president of York, PA-based F. W. Behler, Inc., Dave Yates, says that phase 1 of the project is done, and phase 2 will run its course with the integration of solar-thermal and PV arrays in the fall.  Chosen to manage the mechanical makeover, Yates said he and his top mechanics learned a thing or two while assembling the pieces.

During a period of several months, the energy-in-the-red log house metamorphosed into an unusually energy efficient base camp for outdoor enthusiasts – complete with all the comforts of home.

“Before the remodel, the place left a Sasquatch-sized carbon footprint,” said Yates.  “The log home leaked like a sieve. Winters are brutal up there, so they were burning LP gas furiously and watched the electric meter spin like an old 78 Victrola.

”Yates visited the Wengers in the fall of ’07 to do the heat load calculation and to make notes about the upcoming job. “For the homeowners, achieving energy efficiency was just as important as having year-round comfort,” added Yates.

“Previously, the home had electric a/c and a 140 MBH LP-gas furnace with  supplemental heat from one fireplace and three old potbelly woodstoves,” said Yates.  “They also used several electric heaters and an old electric water heater.”

The Wengers gave Yates flexibility in designing a “green” system, adding that if it made sense to keep some of the old equipment, fine; but where it made better sense to toss out the old to make room for the new was even better.

Before long, materials and equipment were being trucked up the narrow mountain road to the jobsite.  Local waterwell and geothermal driller Dave Eriksen brought in his equipment with instructions to drill three boreholes into which geothermal lines were inserted; holes were then thermally grouted.

The Wengers settled on a unique mechanical system designed by Yates, at the heart of which – for the heating season – would be a high-temp, “THW” water-to-water geothermal system by ClimateMaster, two twin-coil indirect water heaters, and several preassembled, pre- engineered hydronic panels – one of which was built to introduce solar heat for domestic water, then to share additional heat with the radiant system.

By the time the F. W. Behler crew began their work at the home, 100 miles from the shop, the Wengers had already re-sealed all the log, began the basement remodel – complete with truckloads of rigid insulation and a mile of tongue n’ groove pine – and set the foundation for the log garage, including a 150-foot trench between the house and garage for a thermally-protected injection loop run between the two buildings. The planned geo-to-radiant system in the house would heat the garage, too. 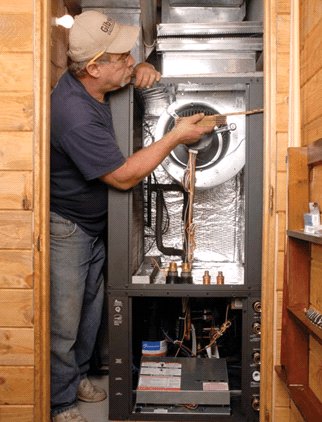 The home’s 1,000 sf. basement had previously included a garage (remodeled into a bedroom), lots of storage space and a laundry room. Space also included a bathroom that the Wengers gutted and enlarged, and a study that became the home’s fifth bedroom.

Radiant, at a Glance

The first radiant heat installation wasn’t hydronic.  Most of the home’s lower level concrete slab was rigorously cleaned. Crack isolation membrane was attached to hairline fissures, and then electric radiant mats were installed prior to thin-setting of ceramic tile and stone flooring.  “We knew we’d need floor-warming down there for the winter months – the big room is where we’ve placed a bar and pool table,” said Rachel Wenger.

“We didn’t want to risk it being uncomfortable.”

While the basement work was under way and the joist bays were open, the Wengers and Yates’ crew stapled up 2,400 lineal feet of synthetic rubber radiant heat tubing to the subfloor to heat the home’s entire main floor.  The many loops were brought back to stainless steel manifolds.

As this was happening, Yates’ crew mounted the hydronic panels which would control hydronic heat flow keying off of an outdoor reset. The panel heat source wasn’t the THW water-to-water unit, but one of the 120-gallon, twin-coil indirects.  “We used both of the large, internal stainless steel coils to circulate water from the THW,” said Yates.  The tank’s 120 gallons of water became the THW’s ‘thermal target’ and the source of all good things, hydronically speaking.”

ClimateMaster’s three- ton water-to-water THW (what Yates refers to as the “geothermal boiler”) is rated at a maximum output of 145°F with a peak COP of 4.5, and that’s with sufficient geo-exchange. Fred Umble, president of Creative Energy Services, a wholesaler based in New Holland, PA, helped Yates choose the right geo equipment and specified a need for three 260- foot boreholes.  But the Wengers asked Eriksen to take the holes down further, lengthening each one by another 40 feet.

“We believe this was the reason for one of the big surprises at system startup in December of ‘08,” said Yates.  Though temps hovered between 10 and 11 degrees outside, the THW unit was delivering system heat of 157°F, substantially higher than the system was rated for.

“We could meet a lot of needs with the THW heating the 120 gallons of water in the main source tank at between 145 and 155 degrees but, still, the three-ton THW couldn’t exceed 36,000  BTUs, so we had to choose carefully what to heat, and how, and insulated real well in all directions.  The surprise was that, with house needs seen to, we still had enough BTUs to heat an injection loop to the garage,” said Yates.

They unfurled a large coil of R-flex, Watts Radiant’s heavily-insulated, underground tubing with embedded, tandem one-inch supply-and-return tubing (available in various sizes).  It was placed inside a four-foot-deep trench between the house and garage.  Today, the subterranean tubing thermally connects the buffer tank’s 120-gallon volume with the garage’s slightly smaller two- temperature radiant heat system. In the heating mode, high temp water (145 to 155°F) is transported via R-flex to the garage where it enters another hydronic panel.

Source water goes directly into a manifold with four loops that disappear into the ceiling. Unseen, they’re stapled to the under-floor of the building’s 600 sf. upper area that includes a bunkhouse bedroom with four beds, a living room, bathroom, kitchenette and hallway, all radiantly heated.

“You could heat the place with a candle,” affirms Yates who inspected the insulation under and around the

radiant tubing.  Staple-up heat is directed upward by R-19 below the tubing.  The Wenger’s achieved an incredible

R-90 in the ceiling and upper knee-walls.  In the garage’s lower level, only a 10-by-30-foot tool room was radiantly heated. Slab heat was accomplished by pre-insulating that portion of the slab; tubing was then attached to rewire and pressure-tested until the concrete over-pour was good n’ hard.

“Last winter was amazing,” said Rachel Wenger. “Even though all the systems weren’t operational, we had plenty of heat for the house and garage.  This winter, with all systems working, we’ll have many more people there to enjoy the warmth inside.”

The THW system sends 145-degree water into a 120-gallon, twin-coil Bradford White indirect water heater which Yates refers to as the “thermal target.”  This stored volume of heated water serves as the heat source for the extensive staple-up and in-slab radiant heat zones.

“The Wengers saw an 80-percent drop in energy expenses last winter,” concluded Yates. “The carbon footprint got a lot smaller, but they’ve added tremendously to the size of their comfort zone!”

ClimateMaster  is the world’s largest and most progressive manufacturer of geothermal heat pumps. We are committed to innovation and dedicated to environmentally clean, economically sound and superbly comfortable home and business environments. Each ClimateMaster product is produced in our state-of-the-art facility utilizing quality management systems that are ISO 9001:2000 certiﬁed. We strive for the highest product quality and service after the sale to give you peace of mind.

An LSB Industries, Inc. company  (NYSE: LXU), ClimateMaster has been designing and building equipment that enhances environments we live and work in every day for more than 50 years. In addition to geothermal heat pumps, ClimateMaster offers the most extensive product line of water-source heat pumps for use in a wide variety of applications.

ClimateMaster products are built in the U.S.A.

Your Local Heating and Cooling Expert for Geothermal Installations: