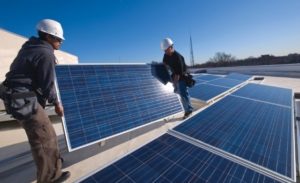 Commercial buildings have high energy needs, and it’s no secret that the HVACR system is one of the largest sources of electricity consumption in them. Since the U.S. Energy Information Administration (EIA) began tracking energy use through its Commercial Buildings Energy Consumption Survey (CBECS) in 1979, total energy consumption has almost doubled. However, while there was a 14 percent increase in total buildings and a 22 percent increase in total floor space between 2003 and 2012, energy use was up only 7 percent, according to findings from the 2012 CBECS.

These findings can be explained by new construction being built to tighter building codes and higher energy performance standards, as well as higher-performance retrofits of existing buildings.

And though the upfront cost may be higher, many commercial building owners are looking to renewable energy technologies — like geothermal and solar — to help increase the performance of their properties.

“Renewable energy technologies are critical components of high-performing buildings for their potential to reduce carbon emissions and grid stress,” said Melissa Baker, senior vice president for technical core at the U.S. Green Building Council (USGBC). “LEED is driven by a set of system goals — the No. 1 system goal is to reduce the contribution of the building to global climate change. Because of the importance of that goal, the Energy and Atmosphere category of the LEED rating system is heavily weighted, and on-site renewable technologies are recognized as an important part of achieving this system goal.

“Additionally, depending on the location of the project, it is critical to consider the impacts that renewable energy technologies may have on the grid,” she continued. “Projects should manage peak demand and value energy conservation or reductions during peak hours.”

According to Steve Smith, CEO, Enertech Global LLC, the use of geothermal heat pumps in the commercial industry is definitely growing in the U.S. 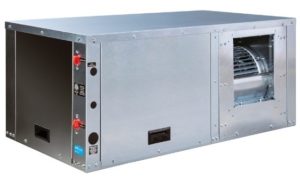 “In 2017, the residential geothermal business was down considerably, while the commercial sector was up,” he said. “The advantages to geothermal systems in the commercial market are not related strictly to lower operating costs, but also to higher comfort and longer equipment life, which delivers much lower life cycle costs [operating and maintaining]. In most commercial applications, the local mechanical contractor can maintain and service the equipment.”

Commercial buildings seeking LEED certification, net-zero, or near net-zero are all drivers of growth in the sector, Smith explained.

“These buildings will almost always migrate toward a geothermal system due to lower electrical power requirements when compared to conventional systems,” he said. “The focus on insulation, a tight building envelope, and other high-performance features means we can have smaller geothermal systems within the building, and the ability to zone allows for parts of buildings to be kept at different temperatures for optimal energy savings. With the flexibility of smaller zones, the interior of the building may be in the air conditioning mode while the outside perimeter is heating in the fall, winter, and spring, which allows efficient transfer of heat energy.” 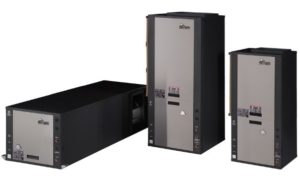 “Owners of commercial office space, hospitality, and multi-family buildings can leverage the long-term energy savings, lower maintenance, and superior comfort a geothermal system can deliver to tenants,” Graf said. “Also, we’ve experienced growth in education installations. Geothermal is a prime solution for K-12 and higher education institutions, with lower operating costs addressing their struggle with declining operating budgets. In addition, school campuses have parking lots, sports fields, and park areas available that are perfect for ground loops and leveraging the land for another use.”

A geothermal source, combined with the use of water source heat pumps, is the premier choice in efficient technology for a commercial building, Graf explained, because water is the most efficient way to move thermal energy.

According to Mike Lemmon, manager, Government Solutions, WaterFurnace Intl. Inc., it’s an exciting time to be involved in the commercial geothermal market because of the introduction of a new generation of high-efficiency water source and ground source equipment and new ground loop design practices. 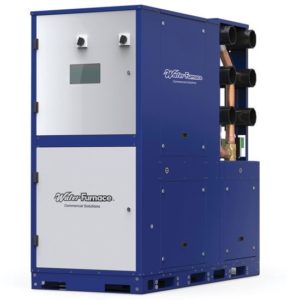 ULTIMATE CONTROL: The WaterFurnace WC Modular Scroll Chiller was designed for use in commercial and industrial applications. The optional six-pipe header rack allows for flexible installation and enables the system to provide simultaneous heating and cooling.

“Ground source systems now offer both architects and mechanical design engineers powerful tools in designing on-site renewable energy systems,” Lemmon said. “As more owners and architects sign on to the AIA’s Challenge 2030 in the goal of creating carbon neutral buildings by 2030, we are seeing more ground source systems being incorporated into these designs.”

The school and government building segments have historically been strong drivers for growth in the commercial geothermal market, Lemmon noted. Additionally, an emerging driver of growth in this market is the commitment to designing new and retrofit buildings to meet high-performance building standards, which requires extensive building modeling early in the design process, he added.

“The triad of tools needed for developing high-performance buildings includes design strategies, technologies and systems, and off-site renewable energy strategies [20 percent maximum],” Lemmon said. “Geothermal plays a key role in the first two. Architects and mechanical engineers have a robust suite of software programs to design and evaluate both the bore field and building mechanical portion of the geo system.”

The 10 percent commercial investment tax credit will remain static through Dec. 31, 2021. Projects can continue through 2022 as long as construction is commenced before Dec. 31, 2021.

“Tax credits will have an influence on the market, but since they were just reinstated in February, it’s still too soon to confirm,” Smith said.

However, Lemmon arguably noted that the federal tax credits have less of an impact in the commercial sector than the residential.

“Commercial credits are a typically smaller percentage credit,” he said. “They can be an influencer when combined with other geothermal credits. State and local energy efficiency and renewable energy credits as well as federal and state historical tax credits can often be strong influencers. Federal and state [where they apply] historical tax credits can amount to a 40 percent credit.”

SOLAR ADVANTAGES: Solar is another growing trend in the high-performance building market. In the first quarter of 2018, the U.S. market installed 2.5 GWdc of solar photovoltaic (PV), a 13 percent year-over-year increase and a 37 percent quarter-over-quarter decrease, according to a report by GTM Research in partnership with the Solar Energy Industries Association (SEIA). Per the report, non-residential PV — coming off of its biggest year ever — fell 34 percent quarter-over-quarter, despite posting 23 percent year-over-year growth. Total installed U.S. PV capacity is expected to more than double over the next five years. By 2023, over 14 GWdc of PV capacity will be installed annually.

“We are increasingly seeing commercial projects take advantage of solar energy due to its increased availability and reduced cost,” Baker said. “The push for net-zero buildings in direct response to the need to reduce a building’s contributions to climate change is another key factor. Many jurisdictions are now prioritizing reductions in building energy use, public disclosure of energy consumption, and striving for zero-net energy consumption. Our LEED v4.1 O+M rating system includes the ability for a project to benchmark its energy use and carbon emissions. The first step is energy use reduction, but then a project must look at how to offset energy use with renewables.”

According to Rich Cooley, CEO, SunTrac USA, the overall commercial solar business is being embraced. He noted that for the solar electric (PV) side of the industry, there was definite growth due to the price point in the commercial space. And while the solar thermal side has a small overall market penetration, it’s all upside, he added. 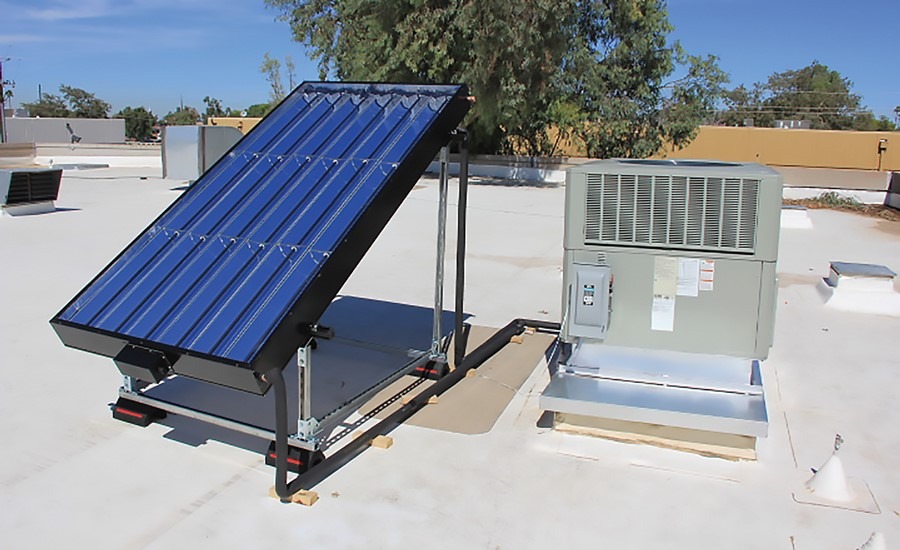 “Commercial building owners are still worried about ROI on initial investments, but now there are solutions for that, such as power purchase agreements, long-term leases, and both capital and operating long-term finance programs,” he said. “We’re on the solar thermal side. Our system integrates with commercial and residential air conditioners. We started in residential, but the commercial space is where we believe we have the largest growth opportunity.”

Devin Cooley, president and COO, SunTrac, added the SunTrac system is great for commercial customers who may want to go solar PV but do not have enough roof space for the system.

“Our product and approach, with its smaller footprint, offers an option they can take,” he said. “Everyone is always looking for an opportunity to reduce the overall energy use of their property while at the same time maximizing the property for its intended purpose. Adding SunTrac to it is going to reduce the operating cost of the commercial property. If it costs less to operate, you have what’s called a higher cap rate, meaning it has greater cash flow and it means the building is more valuable to the building owner. We can help them get better HVAC systems and use a lot less electricity in their operation.”