This is a reposting of an article that seems especially on target because geothermal is still foreign to a lot of people and it can really make the difference in your energy bills, your carbon footprint and hey it is just a cool technology too.

Illustration of a geothermal heating and cooling system that handles multiple loads for a home. Illustration from Modern Geothermal HVAC. 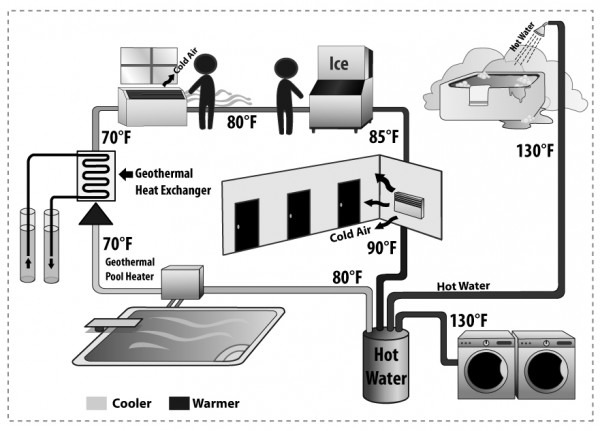 Imagine a home in which the temperature is always comfortable, yet the heating and cooling system is out of sight. That system performs efficiently but doesn’t require extensive maintenance or knowledge on the part of the owners.

The air smells fresh; you can hear the birds chirping and the wind rustling lazily through the trees. The home shares energy with the earth similar to the way the roots of the trees exchange the essentials of life to their leaves and branches. Sounds comfortable, doesn’t it?

Geothermal heating and cooling makes that vision a reality. Geothermal HVAC (heating, ventilating, and air conditioning) brings a building in harmony with the earth beneath, taking advantage of subterranean temperatures to provide heating in the winter and cooling in the summer.

How Geothermal Heating and Cooling Works

Outdoor temperatures fluctuate with the changing seasons but underground temperatures don’t change as dramatically, thanks to the insulating properties of the earth. Four to six feet below ground, temperatures remain relatively constant year-round. A geothermal system, which typically consists of an indoor handling unit and a buried system of pipes, called an earth loop, and/or a pump to reinjection well, capitalizes on these constant temperatures to provide “free” energy.

(Note that geothermal HVAC should not be confused with “geothermal energy,” the process by which electricity is generated directly from the heat inside the earth. That takes place on the scale of utilities and uses different processes, normally by heating water to boiling.)

The pipes that make up an earth loop are usually made of polyethylene and can be buried under the ground horizontally or vertically, depending on the characteristics of the site. If an aquifer is available, engineers may prefer to design an “open loop” system, in which a well is drilled into the underground water. Water is pumped up, run past a heat exchanger, and then the water is returned to the same aquifer, through “reinjection.”

In winter, fluid circulating through the system’s earth loop or well absorbs stored heat from the ground and carries it indoors. The indoor unit compresses the heat to a higher temperature and distributes it throughout the building, as if it were an air conditioner running in reverse. In summer, the geothermal HVAC system pulls heat from the building and carries it through the earth loop/pump to reinjection well, where it deposits the heat into the cooler earth/aquifer.

Unlike ordinary heating and cooling systems, geothermal HVAC systems do not burn fossil fuel to generate heat; they simply transfer heat to and from the earth. Typically, electric power is used only to operate the unit’s fan, compressor, and pump.

A geothermal cooling and heating system has three main components: the heat-pump unit, the liquid heat-exchange medium (open or closed loop), and the air-delivery system (ductwork) and/or the radiant heating (in the floor or elsewhere).

Geothermal heat pumps, as well as all other types of heat pumps, have efficiencies rated according to their coefficient of performance, or COP. It’s a scientific way of determining how much energy the system moves versus how much it uses. Most geothermal heat pump systems have COPs of 3.0 to 5.0. This means for every unit of energy used to power the system, three to five units are supplied as heat.

Geothermal systems require little maintenance. When installed properly, which is critical, the buried loop can last for generations. The unit’s fan, compressor, and pump are housed indoors, protected from the harsh weather conditions, so they tend to last for many years, often decades. Usually, periodic checks and filter changes and annual coil cleaning are the only required maintenance.

Geothermal HVAC systems have been used for more than 60 years in the U.S. and beyond.

They work with nature, not against it, and they emit no greenhouse gases. (As mentioned earlier, they use a smaller amount of electricity to run, because they are coupled in with the earth’s average temperature.)

Geothermal HVAC systems are becoming common features of eco-friendly homes as part of the growing green building movement. Green projects accounted for 20 percent of all newly built homes in the U.S. last year. By 2016, a Wall Street Journal article predicted that green housing will grow from $36 billion a year to as much as $114 billion. That’s approaching 30 to 40 percent of the entire housing market.

But a lot of information out there on geothermal heating and cooling is based on outdated information, or outright myths. In our new book Modern Geothermal HVAC Engineering and Control Applications (Egg/Cunniff/Orio -McGraw-Hill 2013), co-authors Greg Cunniff, Carl Orio and I bust many of these myths.

1.     Geothermal HVAC systems are not considered a renewable technology because they use electricity.

Fact: Geothermal HVAC systems use only one unit of electricity to move up to five units of cooling or heating from the earth to a building.

Fact: Geothermal HVAC systems remove four times more kilowatt-hours of consumption from the electrical grid per dollar spent than photovoltaic and wind power add to the electrical grid. Those other technologies can certainly play an important role, but geothermal HVAC is often the most cost effective way to reduce environmental impact of conditioning spaces.

3.     Geothermal HVAC needs lots of yard or real estate in which to place the polyethylene piping earth loops.

Fact: Depending on the characteristics of the site, the earth loop may be buried vertically, meaning little above-ground surface is needed. Or, if there is an available aquifer that can be tapped into, only a few square feet of real estate are needed. Remember, the water is returned to the aquifer whence it came after passing over a heat exchanger, so it is not “used” or otherwise negatively impacted.

Fact: The systems run very quiet and there is no equipment outside to bother neighbors. 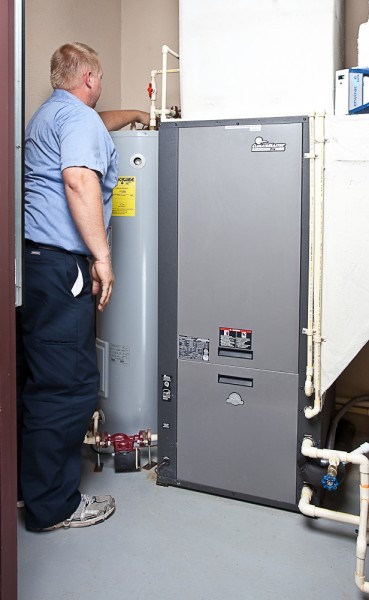 Fact: Earth loops can last for generations. The heat-exchange equipment typically lasts decades, since it is protected indoors. When it does need to be replaced, the expense is much less than putting in an entire new geothermal system, since the loop or well is the most pricey to install. New technical guidelines eliminate the issue of thermal retention in the ground, so heat can be exchanged with it indefinitely. In the past, some improperly sized systems did overheat or overcool the ground over time, to the point that the system no longer had enough of a temperature gradient to function.

Fact: They work just as effectively in cooling and can be engineered to require no additional backup heat source if desired, although some customers decide that it is more cost effective to have a small backup system for just the coldest days if it means their loop can be smaller.

7.     Geothermal HVAC systems cannot heat water, a pool, and a home at the same time. Fact: Systems can be designed to handle multiple loads simultaneously.

Fact: Most systems use only water in the loops or lines.

Fact: Geothermal systems actually consume no water. If an aquifer is used to exchange heat with the earth, all the water is returned to that same aquifer. In the past, there were some “pump and dump” operations that wasted the water after passing over the heat exchanger, but those are exceedingly rare now. When applied commercially, geothermal HVAC systems actually eliminate millions of gallons of water that would otherwise have been evaporated in cooling towers in traditional systems.

10.  Geothermal HVAC technology is not financially feasible without federal and local tax incentives.

Fact: Federal and local incentives typically amount to between 30 and 60 percent of total geothermal system cost, which can often make the initial price of a system competitive with conventional equipment. Standard air-source HVAC systems cost around $3,000 per ton of heating or cooling capacity, during new construction (homes usually use between one and five tons). Geothermal HVAC systems start at about $5,000 per ton, and can go as high as $8,000 or $9,000 per ton. However, new installation practices are reducing costs, to the point where the price is getting closer to conventional systems under the right conditions.

Factors that help reduce cost include economies of scale for community, commercial, or even large residential applications and increasing competition for geothermal equipment (especially from major brands like Bosch, Carrier, and Trane). Open loops, using a pump and reinjection well, are cheaper to install than closed loops.

Jay Egg is the co-author of the new book Modern Geothermal HVAC Engineering and Control Applications (McGraw-Hill 2013), with Greg Cunniff and Carl Orio. He co-wrote the bookGeothermal HVAC, Green Heating and Cooling in 2010 with National Geographic’s Brian Clark Howard. Jay consults with the geothermal HVAC industry. He previously served as an installer of the technology through his company EggGeothermal.

By Susan NicholPublished On: September 26, 2014